Posted in the Cutting   | By

First of all, I would like to point out that my information comes from several sources. First of all, the excellent youtube video of Ken and Shawn from the Kens Kreations channel who made us discover live demonstrations of the different machines plus some additional information during Tanner Bell's live show in the presence of Lori Whitlock and Lia Griffith. As well as information gathered on the American blog Silhouette School and the Spanish blog Planeta Silhouette. This being said, it's time to get to the heart of the matter. 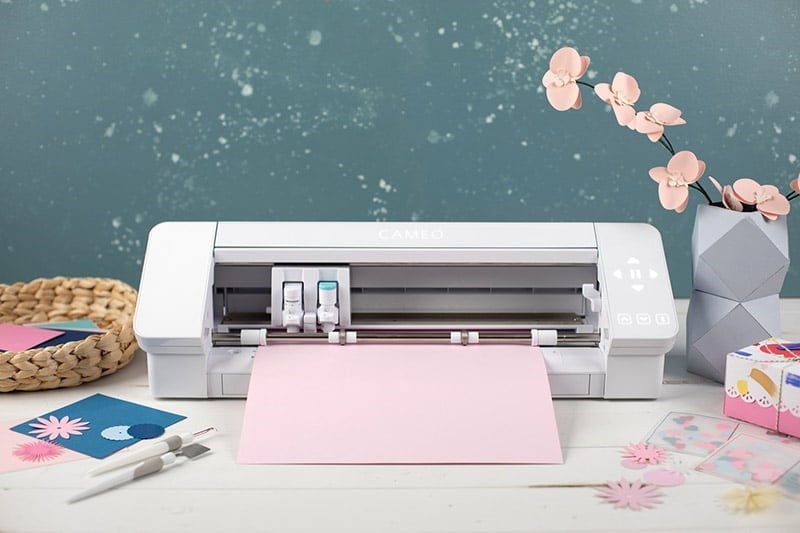 You've probably already read it, but this new machine is a little gem. Here is a small list of the new features:

The 3 versions will seem to have the same capacities, the only difference is to be noted on the Pro version which will not have a cutting mat since it will be mainly used for professional work oriented on vinyl cutting.

Initially, the colours offered will be limited: white, black or pink.

A more powerful and faster Cameo 4

A new design and a roll loader

The Cameo 4 gets rid of its hinged lid and opts for a retractable lid that slides inside the machine, saving precious centimetres to be able to place the machine on a shelf. The lid that is currently open when using the Silhouette Cameo 3 adds 16 cm to the height of the machine.

he touch screen replaces the LCD screen of the Cameo 3.

The completely redesigned Cameo 4's new carriage allows the integration of new tools that make full use of the new cutting force and machine speed. The tool holders are larger and adapters will be supplied so that the old tools from previous Silhouette machines can continue to be used. It will therefore logically not be possible to use the tools from the Cameo 4 in a Portrait or another Cameo.

The new Cameo 4 tools have a sensor on the rear, once inserted into the tool holder, they allow the machine and software to detect the type of tool in place. This should allow us to fix our omissions, I think it's safe to say that we've all been there.

New tools are also being introduced with the Cameo 4, a Kraft blade for cutting thicker materials and a rotating blade.

Although it was possible to cut fabrics with the Cameo 3, some materials were more difficult to cut with the conventional blade. Silhouette here uses the same tool as the Cricut Maker and its Rotary Blade. No more a blade that pulls the fabric but a blade that rolls and cuts textile materials with ease. Look at the demonstration below, this is the standard felt cut (the demonstrator talks about thick felt bought from Joann) without any stabilizer on the back of the fabric.

Cutting without a cutting mat

You probably knew this, but your Cameo 3 already allows you to make cuts without a mat. This is indeed the case when you cut your vinyls with the roll feeder. This is also possible with the printable self-adhesive sheets for your stickers. If you use the Kiss Cut technique, the stickers will be cut on the surface and remain on the sheet.

Now with the Silhouette Cameo 4, you can cut out cardboard WITHOUT CARPETS (yes, capital letters and bold text, you can imagine my excitement). In the video below, you can see that once the paper is ejected from the machine, the cut is temporarily held in place by micro dots, Ken says that the cut is still perfectly sharp and that there is no paper residue left on the edges.

A prototype heat press was also presented at the show. The dimensions are not precisely known at the moment, the Silhouette School blog speaks of 11″*16″, i.e. 27.9 x 40 cm; for the Spanish website Planetta Silhouette, it would rather be a format close to A3 with an area of 50 x 50 cm. The design is reminiscent of a scanner, the machine is very flat and seems light. A mini iron seems to be also provided and can be stored at the back of the press.

Silhouette adds to its product collection new printable adhesive papers to create your stickers as well as a new kit.

Some of the new features to be expected in future software updates were also discussed during the Summit. Here is a short list:

Rates and dates of outings

The prices indicated below are given as an indication and may vary slightly before the official release of the different machines:

Concerning the release dates, at first, only the standard size of 12″ will be available for purchase. Silhouette France is talking about September, Silhouette America is talking about September-October. A limited number of machines will be available for pre-order. The Swing Design website already has the Cameo 4 in its inventory.
The Plus and Pro versions should arrive in the first half of 2020.

If you wish to equip yourself or change machines, I strongly advise you to wait until the Cameo 4 has left the factory. After 3 years of waiting, Silhouette is releasing a machine that in my opinion rivals and surpasses its competitors by far.

For me, who uses my machine mainly for card making, the fact that I can use card stock without a cutting mat is a huge bonus, goodbye to the glue residue on the back of some papers/transparencies. The fact that I can do without cutting mats with more materials also makes them last longer (although I don't really have problems with this anymore as I make all my cutting mats myself).

The new rotating blade is really very interesting for textiles. Both the rotating blade and the Kraft blade are optional tools and we do not know the prices at the moment. The Cricut Maker includes the rotary blade in its original package. The Knife blade (equivalent to the Silhouette Kraft blade) is priced at $46.

Silhouette does not currently offer a tool to create paper fold marks as it does with the Cricut Maker and its optional roulette tool, which also costs $46. However, with the cutting force drastically increased and the left-hand tool holder allowing the use of mobile tools such as the rotary blade, there is no doubt that Silhouette will arrive with new tools in the months following its commercialization.

The simplification of vectorization in Silhouette Studio seems useful to me. Currently, I don't use much the other parameters available in the vectorization panel. The creation of customizable palettes will also be nice, as will the new line style, which will give a calligraphic effect to simple Sketch-type designs. I'm more dubious about the new voice command functions, I admit that I like to have as much control as possible when I use my software and voice recognition is sometimes a bit hazardous.
It remains to be seen with which version of Silhouette Studio these new features will be present. If I feel it is necessary to invest in the Design version to fully enjoy the Silhouette machine, I will find it a shame that the palettes or line style are only available in the higher versions.

I love my Silhouette Cameo 3 BUT I hate its noise. For me, it's the only big flaw in this machine. The limited cutting force doesn't bother me in my current use. I only use the automatic blade, it's an excellent tool but the adjustment process is noisy since it takes several clicks for each new setting. The new automatic blade on the Cameo 4, which can be adjusted with a single click, will considerably improve the noise level, as will the increased speed of the machine. Less cutting time, less noise. Ken also seemed to say that the new machine was much quieter, even though it was difficult in the particularly noisy conditions of the show to fully appreciate the improvement of the machine in this respect.

That's it, my little summary is finished! I hope this information will have interested you. If you wish, you can also add a little thumb to the video of Ken and Shawn without whom we wouldn't have been able to get such detailed information and demo videos of these new machines.
Feel free to give me your opinion in the comments and tell me if you too are looking forward to the new Cameo 4.

Find all the articles of the blog La Petite Crafterie : https://www.lapetitecrafterie.com/silhouette-cameo-4-presentation-comparaison/